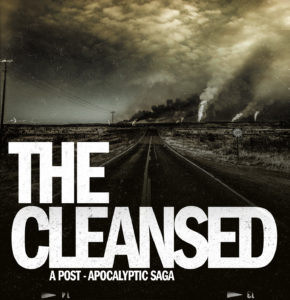 The entirety of The Cleansed is available as a free podcast, Seasons 1 and 2 are completed and Season 3 is releasing once per month, the first weekend of each month, through the Series Finale in July 2016.

You can also use this website’s navigation to find any individual episode and download the link directly for playback on desktop or other platform.

Fifteen years later after society fell apart, the “Breaking” is a distant memory, but hard times aren’t. We meet the survivors of the “Battle of Bangor” living in a place called the Refuge, a self-sustaining stronghold in the rugged landscape of Northern Maine.

Ingenuity, trial and error, and old fashioned hard work have kept the stronghold running through unprecedented hardships, and while the children of this new world grow up tough, they do not fully appreciate all that came before. Instead, they dream of life beyond the safe scrap-yard metal walls of their Refuge, and of what cities might be left in the ruins of old America. They will find out soon enough, when a ghost from their parents’ past comes back hearkening of a new and coming war.

Months later, our motley band of heroes travel down a treacherous river—but nature is only the beginning of the challenges they will face. The heroes find a patchwork of a forgotten force, and a grizzled lighthouse keeper holds the key to the next stage of their journey.

In the shadows of the city of Corinth, a great evil uses fear and violence to control the minds of the masses. Meanwhile, a prophet says the coming of Jesus is nigh, but are there truly divine forces at work or merely the manipulation of man?

Borderton has fallen, and in the ashes Marc, Maria, Luke, and the scientist Abraham all struggle to survive. In this waking nightmare, Luke is plagued by haunting dreams – or are they visions? – of a past where powers of science were near their peak. Galvanized by a tragic event, the party prepares to escape this ravaged city, if they can make it past the raiding parties and outlaws that prowl the dark.

The dust has settled in some forgotten part of the Soup where Queenie and Lucian awaken, a nearly forgotten dream rattling around in their heads. Can secrets from a stranger lead them to a place that can answer the questions that plague them? And will answers be any good? Can they be used to stop Saul and Paul from their inexorable march towards Armageddon?