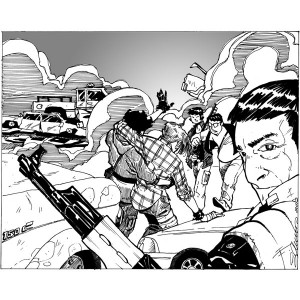 In the wake of the nightmare that was Tully’s barn, Sam appears ready to go to battle. But there is no battle left, and no chance to help but to mop up the mess. Marc, a wounded young warrior from the Dwellers, tries to keep his lips tight about his homeland and his plight, but it’s clear there are few options left but to plow forward, whatever the cost.

Amos and Lucian escape the fire and conflagration with Paul, a strange man who bears witness to a coming holy war. Paul leads them to the home of his people – the Believers – who welcome them with open arms. Arms maybe a little too open.

Zeke, awkwardly moving into a new role, tells a secret to Richard that sets unimaginable wheels into motion.