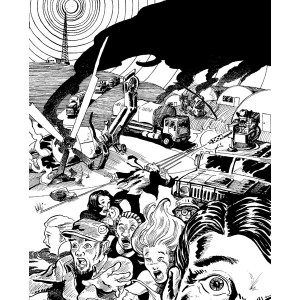 Some time in the not so distant future, the world as we know it is starting to unravel. The United States is mired in unwinnable wars, gas is scarce and the transportation system grinds to a halt. Homegrown terrorists take out the electric grid. Food is strictly rationed and distributed by the military. As citizens grow increasingly angry with the government, martial law is called in to maintain peace.

And then things really start to get bad.

In the prologue to The Cleansed, Bangor, Maine becomes the epicenter of the apocalypse. John Prophet, a returning soldier from the War in Saudi Arabia, takes up arms against a raving madman. Sam Miller follows close behind, until she’s called in to help a National Guard sergeant – David – who is in way over his head. In a trailer down in Cape Hart, events are unfolding that will change Luke’s life forever.

Listen to The Cleansed, Episode Zero