In the mid 21st century the energy crisis arrives.

The world’s nations fight bitterly over diminishing fossil fuels. Food is scarce and hard to transport. Acts of God and humans take down the electrical grid. Civilization as we know it grinds to a halt. Technology does not save us.

And then things get really bad.

Across America, the authority of the federal government is undermined by fractious groups, and the ensuing period of lawlessness is called “The Breaking ” As cities burn, suburbs vacate and the woods fill with rugged survivalists ready to stand their ground, the elite are are either slaughtered or vanish. Class warfare incinerates society. Without food deliveries, hunger is widespread, and water becomes a scarce commodity. These are dark times.

But not all is hopeless. In rural Maine, a group of civilians and soldiers has made a stand at an old Army base they rename “The Refuge.” They relearn how to grow food, while putting what technology they still have – solar panels, wind, biodiesel – to work. And all seems well, until 15 years later, when a ghost from the past returns telling them about a new war…

Note: No spoilers below, but if you like to hear a story fresh without any prior knowledge of what it’s about, you should stop reading. 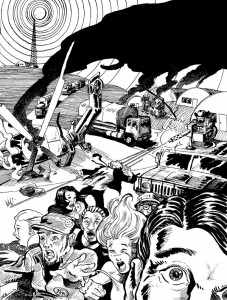 Episode Zero thrusts us into a scary world not so far off from today. The electric grid has been down for months, America is mired in unwinnable wars in the middle east after the collapse of Saudi Arabia, and food is rationed weekly and distributed by federal forces. But in the remote city of Bangor, Maine, Stephen King’s rock and roll radio station WKIT is still spinning out the good tunes.

Thanks to a propane generator and a legion of fans with hand-crank radios, WKIT can keep delivering this decent medicine in hard times. Preparations are underway for a special broadcast of the classic radio serial “War of the Worlds” – now 100 years old – and a group of weary Army and National Guard troops are ready to kick back and enjoy the show. But just as the lights go down, gunfire erupts in the distance and as one character puts it, “Hell has come to the home front.”

A militia group called “The Dwellers” sieges WKIT believing the state of martial law will never end – that the government has found a way to eliminate basic civil liberties and will never give them back. Their violent uprising sends the city of Bangor into chaos, and a group of civilians and soldiers finds their fates intertwine and that making fast friends is essential should they hope for any chance of escape. 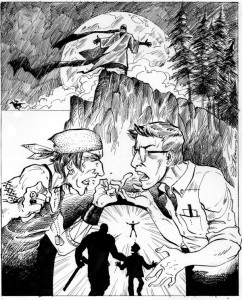 Fifteen years later, the “Breaking” is a distant memory, but hard times aren’t. We meet the survivors of the “Battle of Bangor” living in a place called the Refuge, a self-sustaining stronghold in the rugged landscape of Northern Maine. Ingenuity, trial and error, and old fashioned hard work have kept the stronghold running through unprecedented hardships, and while the children of this new world grow up tough, they do not fully appreciate all that came before. Instead, they dream of life beyond the safe scrap-yard metal walls of their Refuge, and of what cities might be left in the ruins of old America.

These dreams might never come to pass if not for a stranger who staggers into their refuge one day. While out hunting for elk, a specter arrives in the distance atop a horse, collapsing before them muttering “Refuge.”

The stranger is Prophet, a former US Army soldier who stands by his oath to defend the U.S. Constitution, though the definition of what exactly that means has been muddled up a bit in these strange times. He has scratched tooth and nail since the “Battle of Bangor” to bring order back to the scrappy remains of New York City (now called “Corinth”), and just when he thought things were coming together, a new force – The Republic – appeared bearing with them a most potent olive branch – The Citadel, a massive nuclear power powered aircraft carrier they can use to restore power to the City.

Prophet doubts the Republic’s motives (seeing as how they also have missiles, guns, planes, and a lot of really mean looking guys in scary uniforms) and so he is on the run, trying to undermine the Republic’s authority and build a force to stop this new threat to freedom.

But even as Prophet runs, other forces are at work in the Republic. A dark man called Saul takes in Prophet’s fractured Rebel group in exchange for a tiny little secret. A man named Paul preaches of the coming of the Lord Jesus – a mighty savior who needs an army – and his preaching is sweet salve to many lost, confused, and broken people. He promises a beautiful life to come beyond this one for anyone who will fight, and fight they will. Because whatever secret Saul knows, it has the power to destroy everyone.

As Saul and Paul build their forces and prepare for their ultimate battle, the youths reluctantly follow the stranger, John Prophet. But can this broken man unite the scattered tribes in order to stop the world from descending into chaos forever?

Get started with a recap of what happened in Season One…