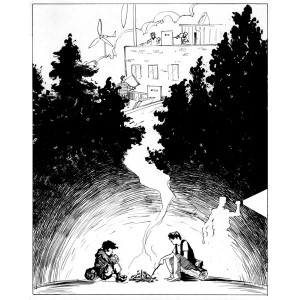 Far from the safety of the Refuge lies the City of Corinth, a broken place that once called itself New York. From the ashes, John Prophet emerged, uniting disparate groups and pushing out rival gangs. The city lay in – well, not quite peace – but a state of sanctity for some years, before a new force entered: The Republic.

But on this day, no one decries the Republic. These soldiers, with their guns and ships, are turning on electricity and promising freedom. There is music, parades, fireworks. No one sees the looming shadow behind them. No one sees that behind their promises of good will, lies an iron fist.

While dark shadows grow behind the wake of a parade, Luke and Maria find themselves headed down an uncertain path, while all is not quiet outside the gates of the Refuge.